Did you know that The Designer Circle is celebrating its 100th Anniversary!  Okay so not 100 Years (Giggles), but it’s 100th Round!  That’s an extremely big accomplishment in Second Life, there are so many Sales Rooms that close after like 2o Rounds, 100 is remarkable.  So with Designer Circle Celebrating 100, you sort of get a celebration yourselves, how about special free gifts for the occasion?  You need to be a Designer Circle group member, but joining is free.  There are at least 10 nice items, Lilliana is even wearing one Today!

I have another announcement!  Another Sponsor, well another Sales Room Sponsor, Lilliana is now a proud member of the Designer Showcase!  I’ve been trying to get on this Team for a bit, The Designer Showcase is a great Monthly Event and I am wearing a few items from there!  Some sad news, I have been blogging The Vanity Fair for the entire week, this Firday, March 6th it’s closing the doors.  If you haven’t paid a visit try to go before the week ends. The Vanity Fair seems to have had a great turn-out every time I took a trip there, there was  number of Residents wandering around.

Some personal news, I finally did it, I finally bought Lilliana one of those Mesh Project Heads, told you all I would probably do it and I did over the weekend.  Today is my first Post wearing the Babyface Head.  I’m still figuring things out, as everything new in SL I will get better with usage:)  Since I am talking about the Head lets start with my Skin from there we talk The Vanity Fair, beacause Lilli’s Skin is WoW Skins Sahra TMP Installer, I’m wearing the Dark Tan Tone, but as always, you can get all of WoW’s other skin tones. Something else you can find at The Vanity Fair is Lilli’s Necklace, it’s one of Tantalum’s Vanity Fair Exclusives the My Bleeding Heart Necklace.  Touch Menu with Lots of color options is included!

Finally the Designer Circle’s 100th Anniversary Round! Ms. Corleone’s Hair, Jewelry, Nail Polish and Poses are Exclusives at  Designer Cirle.  The Hair is the gift it’s [Amarelo Managa] Spring Hair, you get Black, Blonde, Brown, Grey and Red in the Pack.  The Spring Hair Pack is free for visiting Designer Circle this Round, you have to be in the Designer Circle Group, but it’s a free join, so Freebie! Next is Ms. C’s Bracelets and Ring, they are a set by Baubles! by Phe called Wild and Chic Set,  The Nail Polish is JAM Fish Scales SLink Applier Sets, and last Designer Circle preview are the first three Poses, they are from the IOS’s Poses with Roses Set all of this and much more can be found at The Designer Circle.

Today I am also using another Designer’s Poses, and the this second set is a freebie.  Joint the Elephante Poses Subscriber Gift and you’ll get the Beautiful Hangover Pose Set, threet cute Static Poses for Free!  Me and my Avi were out and about, we were roaming the very beautiful Leka SIM .:HERE:. 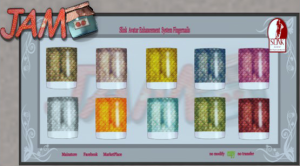 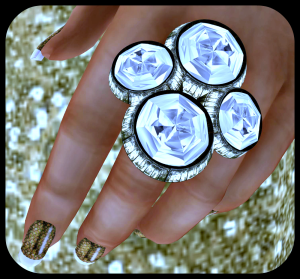