We are only in the first Week of August and already I am seeing “Back to School” commercials, sales, etc.  I know when I was still in school I hated thinking about going back in August.  There’s still a Month left, 4 weeks!  My Post Today all about Summer!

I should have called the Post a Day at the Beach!  I spent all Day there in SL.  Lilliana Post will take you to the Aloha Fair II.  Have you gone yet?  If not, you better get there soon.  The Aloha Fair II says bye, bye, until next year on August 10th which is Tomorrow.  A new round of Apply Me! starts this weekend. I have my Sponsor from Apply Me! featured below.  A new round of Designer Showcase began on the 5th, I already blogged one Designer from that Event in my last Post, this Post two more Designers from Designer Showcase.  Plus I have fairly Newness from Truth, a Brand New Release from Dulce Secrets and Vestige Poses at the Thrift Shop 10 again, this time I have a SLURL, Thrift Shop opened Today!

Lilliana’s Outfit, it’s really a very cute Bikini by DEW called Alani.  The Set is the Bra and Skirt, which I can totally see wearing to a club and dancing all night long.  DEW’s Alani is my first Exclusive from Aloha Fair II.  I going to talk all Aloha Fair II Designers right here.  Lilliana’s Sandals are   E C R U’s “Dune” Wedges in Cyan.  There are lots of other Colors available of E C R U’s Dune Wedges sold separately at Aloha Fair II. My final Designer from Aloha Fair II is  Ghee.  Lilliana is wearing Ghee’s Aloha Nails Nail Polish for SLinks.  Not only is Ghee my last Aloha Fair II Designer, but most likely by final post for Aloha Fair II.  I mentioned it above, Aloha Fair II ends on Monday, August 10th.  You still have time to visit and pick up something in the summer theme, and P.S. last chance to pick up some Freebies!

Lilli is wearing a Kick-Ass Tattoo Today.  The Tat is by [PixyStix] called Peak Hour.  [PixyStix] Peak Hour Tattoo is being Exclusively sold at the new Round of Apply Me!  I am loving on [PixyStix’s] Peak Hour, the style, the ink is a perfect color.  I am also showing the actual Ad for Peak Hour.  The Tat not only covers hands, front rib cage and back rib cage, but also around the nipples. Yeah, yeah Lilli is a little shy and is not one to pose a la nude for just anyone.  I used the SLink Applier of [PixyStix’s] Peak Hour and it works seamlessly. Apply Me! is the newest Event run by SOLARIS.  This Round is #2, the August Round Opens Tomorrow, August 10th and runs until August 10th!

The only other accessory LC is wearing besides the Tattoo, is Maxi Gossamer’s Nerissa Cowrie Shell Earrings.  I thought these were perfect, the shells toped off LC’s beach look.  The Nerissa Corie Earrings by Maxi Gossamer are part of a 3 pack, plus they are color change.  Now we are up to the Poses, I used two sets again this time.  The first are another Designer Showcase Designer.  My first 3 poses are {NANTRAs} Goody 2 Shoes Pose Set.  The Goody 2 Shoes Pose set includes 6 static poses plus the Mirrors.  {NANTRAs} Goody2 Shoes is the perfect set for showcases any pair of shoes!  The second set of Poses comes from Vestige Poses.  I used two Poses from Red Carpet Pose Set 2, which is another Exclusive from Vestige Poses for Thirft Shop 10.  Last Post I used Poses from Vestige’s Red Carpet 1 and mention Thrift Shop 10 opens on August 8th, Today is August 8th, Thrift Shop 10 is Open! 🙂 If you are wondering about the scenic beach area in my photos below, well it’s Brandy Wine Island at Black Basalt Beach and can be visited .:HERE:. 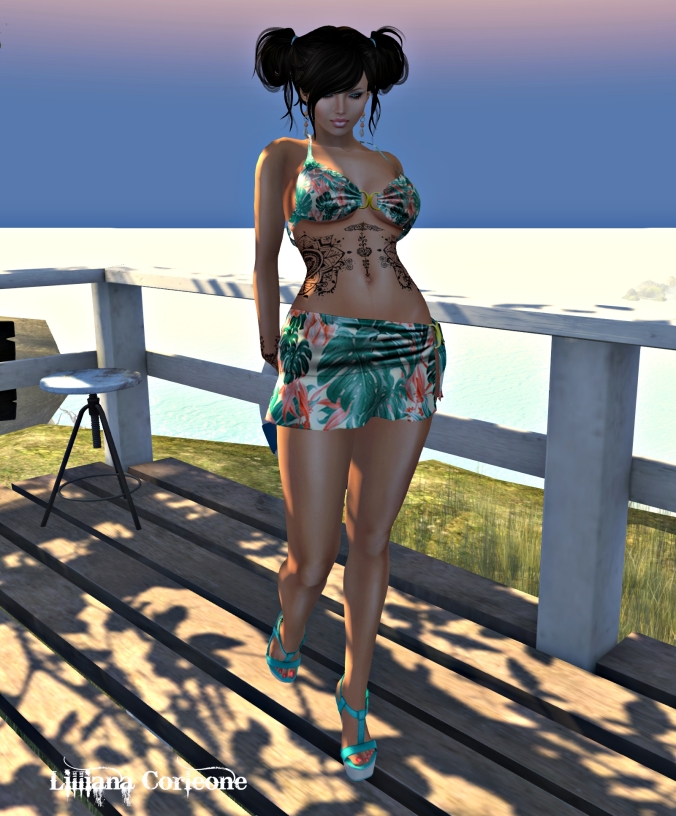